This badge is very similar to a real-life police badge. It has a star symbol in the center with the words "Trust, Integrity, Bravery" around it in a circle. It also has "Officer" on the top arch and "Police" on the bottom arch.

The badge is first seen at Judy Hopps' graduation ceremony. After Judy completed her training at the Zootopia Police Academy, Mayor Lionheart speaks at the event and announces that his Mammal Inclusion Initiative has produced its first police academy graduate and then presents Judy, naming her the ZPD's very first rabbit officer. Judy walks onstage and Assistant Mayor Bellwether presents her with her badge.

Judy leads Chief Bogo and the rest of the ZPD to the Rainforest District gondolas, where she had handcuffed the savage Renato Manchas to a pole. To her surprise, Manchas is nowhere to be found. Enraged, Chief Bogo demands that she hand over her badge for failing to solve the case within the 48 hour deadline, until Nick Wilde stands up for her, saying she will not give Chief Bogo her badge, as they still have 10 hours left to find Emmitt Otterton, and Judy and Nick leave on the gondola.

After the missing mammals are found, Judy is interviewed at a press conference, and says that predators are becoming savage via their own biology. This creates a divide in the city between prey and predators. Ashamed of what she's done, she turns over her badge, resigning.

Months after the Night howler case is solved and Bellwether is arrested, Judy rejoins the ZPD, Nick goes to the academy and completes his training, and Judy, now an accomplished police officer, gives a speech and presents him with his own badge during his own graduation ceremony, and he becomes the first fox officer as well as Judy's partner.

Judy's badge turned in after she resigns. 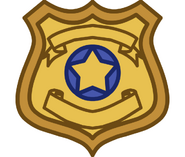 A police badge emoticon from the Club Penguin Zootopia Takeover.
Add a photo to this gallery 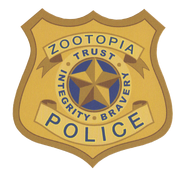 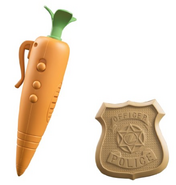 Judy's Carrot Recorder and Badge
Add a photo to this gallery

A badge as seen in Zootopia: As Told By Emoji

Retrieved from "https://zootopia.fandom.com/wiki/Zootopia_Police_badge?oldid=97528"
Community content is available under CC-BY-SA unless otherwise noted.